Alpine skiing is a personal and unique way of experiencing the mountains and nature in its winter guise.

More experienced skiers can try the countless routes that lead to peaks or shelters in summer and winter. Among them, the Carnic Alps, which in summer are characterized by meadows and pastures. The more demanding Julian Alps become favourite destinations for enthusiasts of this discipline in winter. The climb of Mount Cocco or Cima Bella to Mount Santo del Lussari along the classic Pilgrim’s Path, the Zacchi Shelter, the Montasio Plateau are just some of the itineraries chosen by enthusiasts of this exciting sport to surround themselves in nature in absolute tranquillity.

Climb: from car park P3, P4 or P5.  Usually, alpine skiers who face Mount Cocco leave the valley floor following the forest route, which from the Locanda “Al Camoscio” rises North-West, passing some malghe (shepherd huts). They usually choose between two distinct paths at the first bridge: the first doesn’t cross the bridge. After a hairpin bend to the left, it continues straight ahead over grazing hills or sparse woodland, gaining the open slopes below the saddle between Mount Cocco and Cima Bella. The second, crossing the bridge, allows the skiers to pass on the valley’s left side (an advisable option if the right side is not very snowy) down a small path, or even through the woods with no fixed route, leading to the stone building of the Villaggio Cocco (1460 metres) reached by another small road. Along this route, on the right, the alpine skiers generally climb up to a clearing where they cross the previous route (1536 metres). Continuing on open ground, they reach the saddle between the two peaks (1814 metres) and, to the left, near the North ridge, climb to the summit.

Descent: is generally along the same climbing route. The most demanding alpine skiers can also descend from the summit directly North-East down a fairly steep slope..

Climb: the climbing route coincides with that of Mount Cocco up to the saddle at an altitude of 1814 metres. From here, along the right side of the ridge, it touches the extensive peak (boundary stone).

Descent: Alpine skiers generally descend along the easy and enjoyable climbing route. However, they often find it interesting to descend through the woods in the North / North-East direction, often on fresh snow. At the end, they keep to the right to gain the Forcella Fontana Fredda (1683 metres), crossed by a small road. They then make an S (without following the valley floor, however more or less skiable, but keep on the route that is initially flat on the right side), following the pleasant road that after about 1 km emerges on the glades at the crossroads of 1536 metres of altitude, where the climbing route passes.

Climb: from car park P3, P4 or P5.  Alpine Skiers usually follow one of the two routes described above to reach the crossroads at 1536 metres of altitude. Here they take a right on a small road, flanked by fir trees, which branches off towards North-West at a moderate slope and, once they reach the bottom of a valley, they climb along two hairpin bends towards Forcella Fontana Fredda (1683 metres). Turning right, they face the prominent Western ridge, remaining on the left side, first between high fir trees, then on increasingly open ground to the panoramic summit.

Climb: From car park P6 – former Nordio Shelter. Alpine Skiers usually follow the forest road that leads to the shelter of the same name for about 2 km. Leaving the shelter on the right, they briefly touch Sella di Lom (1460 metres) and the village of Dolinza Alm. From here, they turn left, passing between the malghe pastures and following a forest road that climbs diagonally on the right side of the slope above until reaching the edge of the forest. They then return to the left to go around the ridge and climb on the right side of the valley called in the local language “Papret”. On reaching the open slopes below the ridge between Sagran and Starhand, they approach the latter moving to the right of the hilltop, up to the rocks that support the summit ridge, crossing to the right in the direction of the grove they face a short steep gully that leads to the top.

Descent: Skiers usually descend along the main ridge along the south side towards Mount Sagran. Once at the foot of the latter, either they reach the summit (80 metres of altitude difference) by going down the excellently skiable west ridge, or they descend directly to the right down a steep wooded valley. They have to move gradually to the left when approaching the Forcella Fontana Fredda and not risk being too low. Crossing the mountain pass, they return to the Camoscio along the Pad Tamer valley.

Climb: From the car park P6 – former Nordio Shelter. Alpine Skiers usually continue on a forest road to the shelter of the same name. They turn right and, along a short stretch on the valley floor, follow the signs on the left side (n. 403/404) of the mule track towards Sella Bistrizza. With some initial stretches through the dense forest and then with a long diagonal path on increasingly open ground, they reach the saddle (1718 metres). Before reaching it, they directly attack the south side, twisting and turning between outlying rocks, reaching the hilly summit and then the extensive peak.

Descent: The skiers descend along the climbing route. 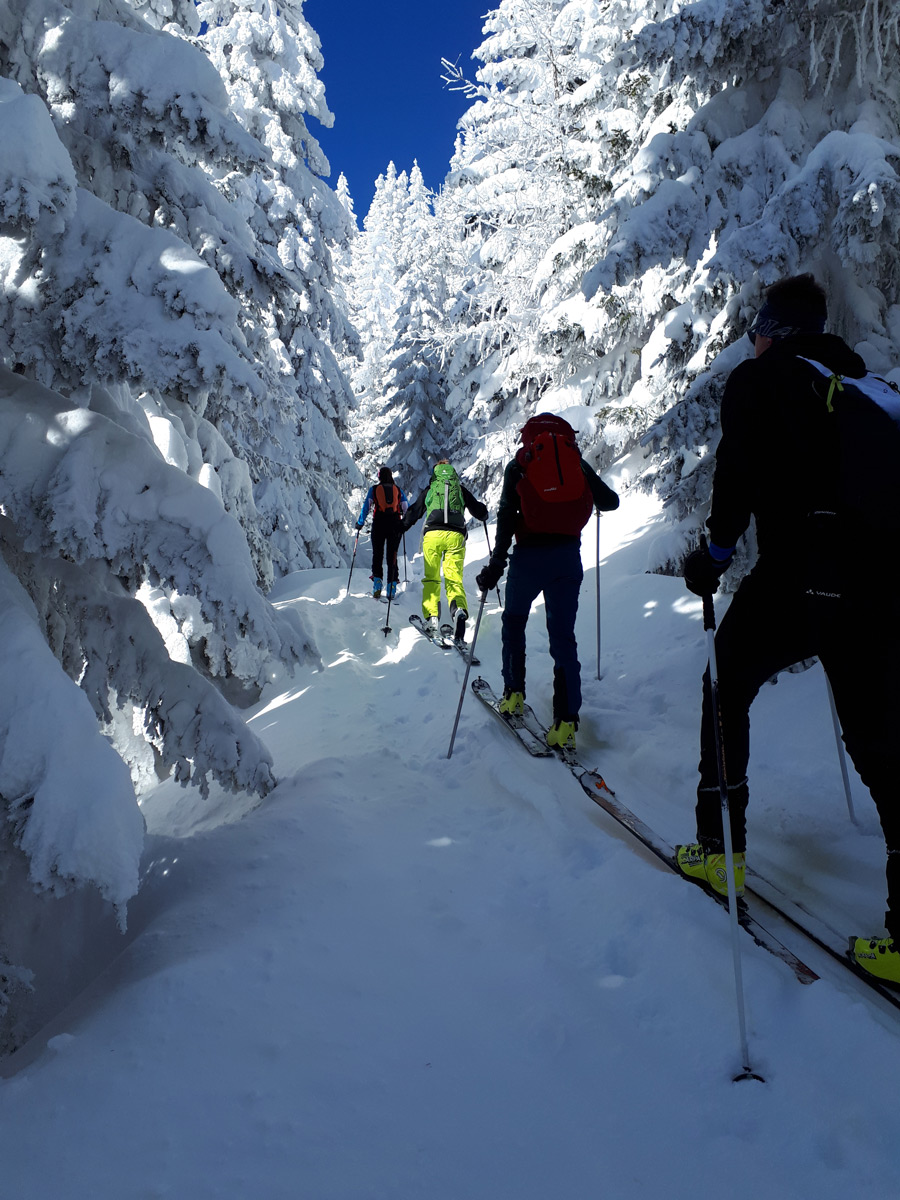 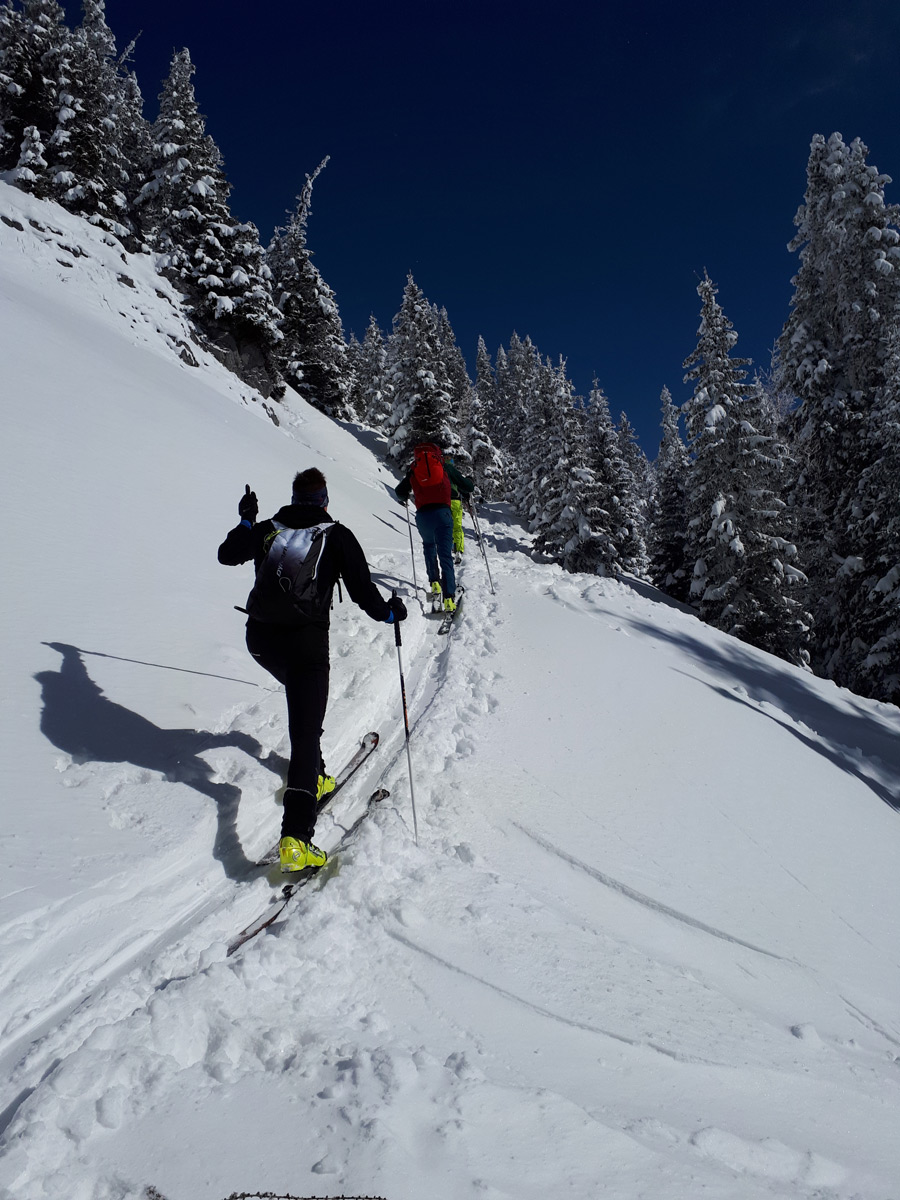 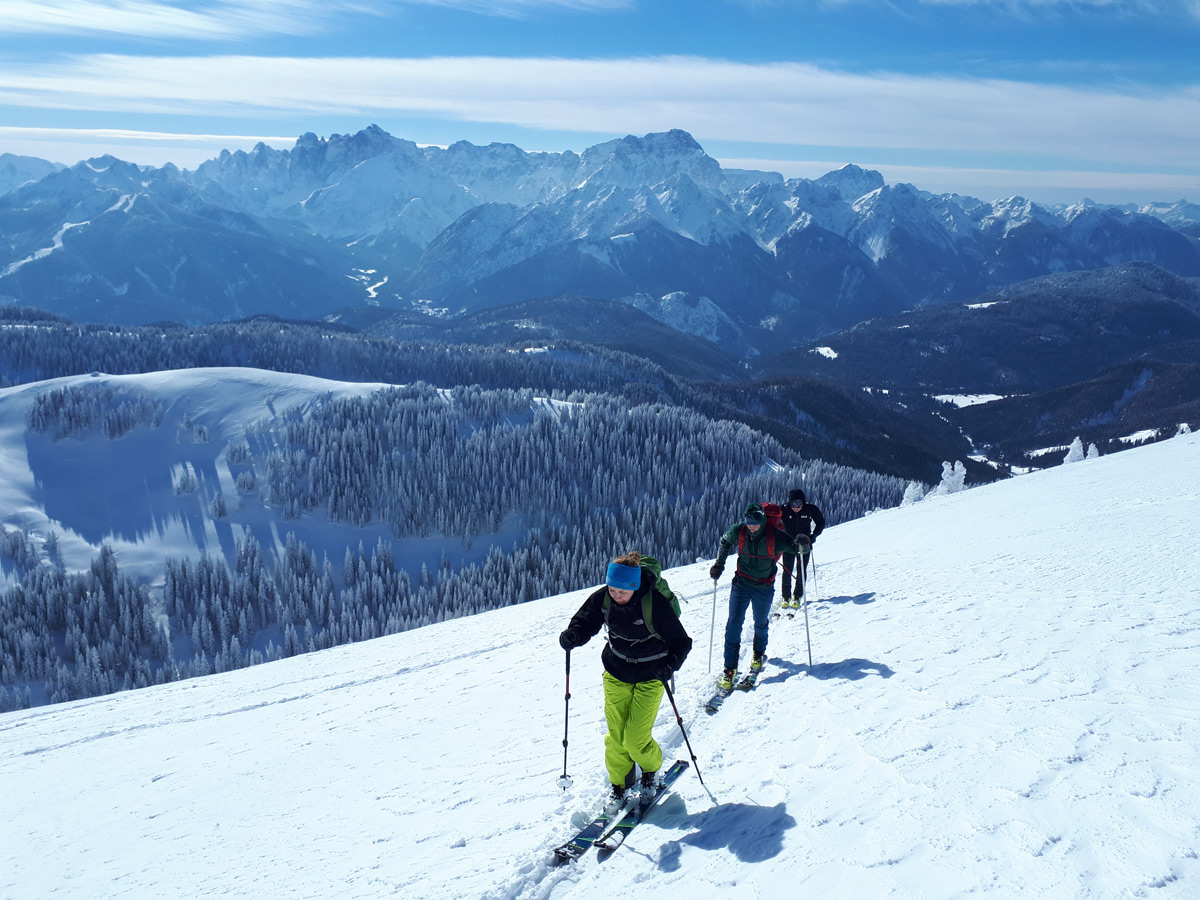 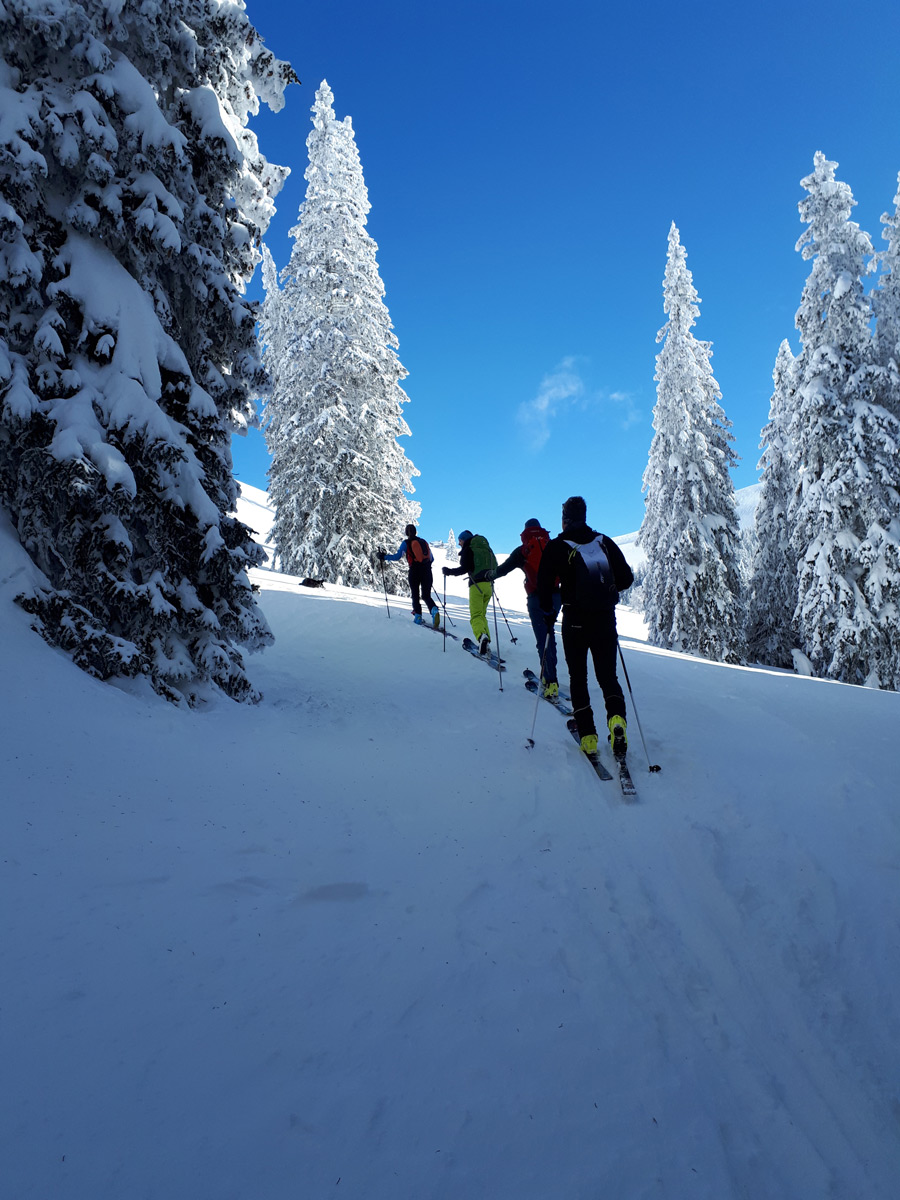 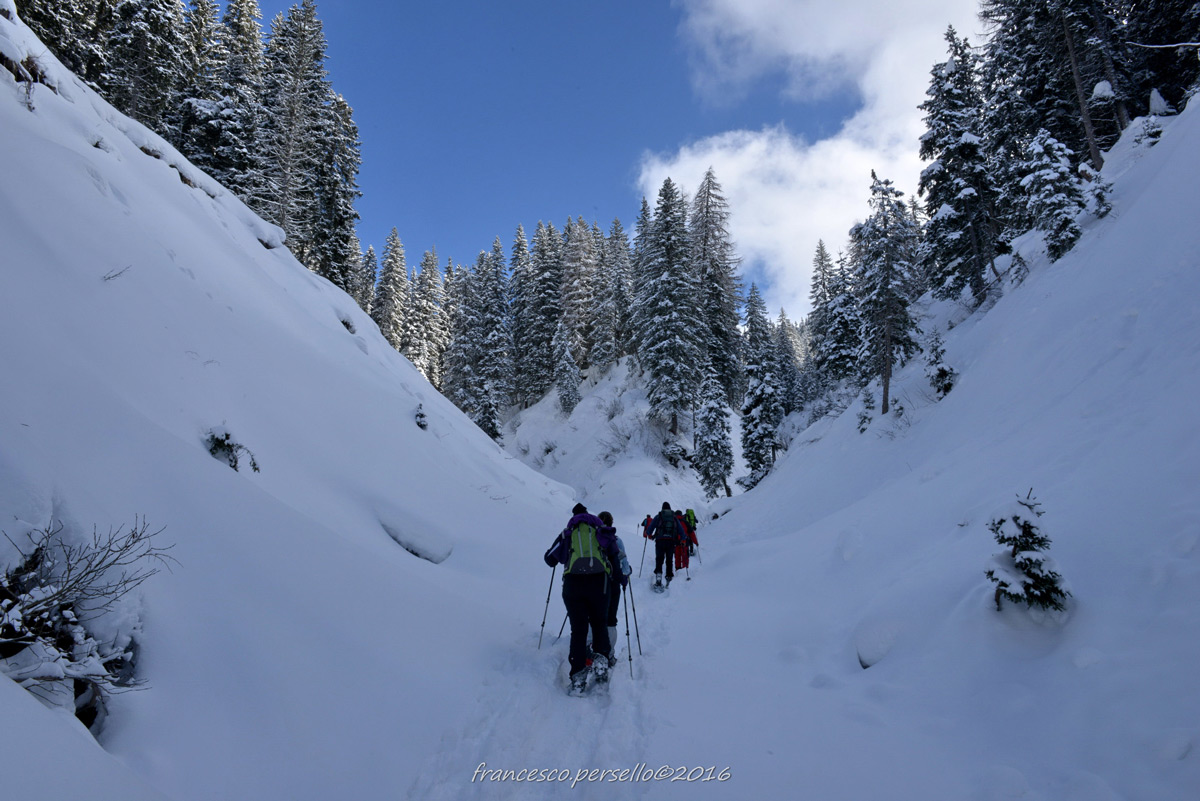 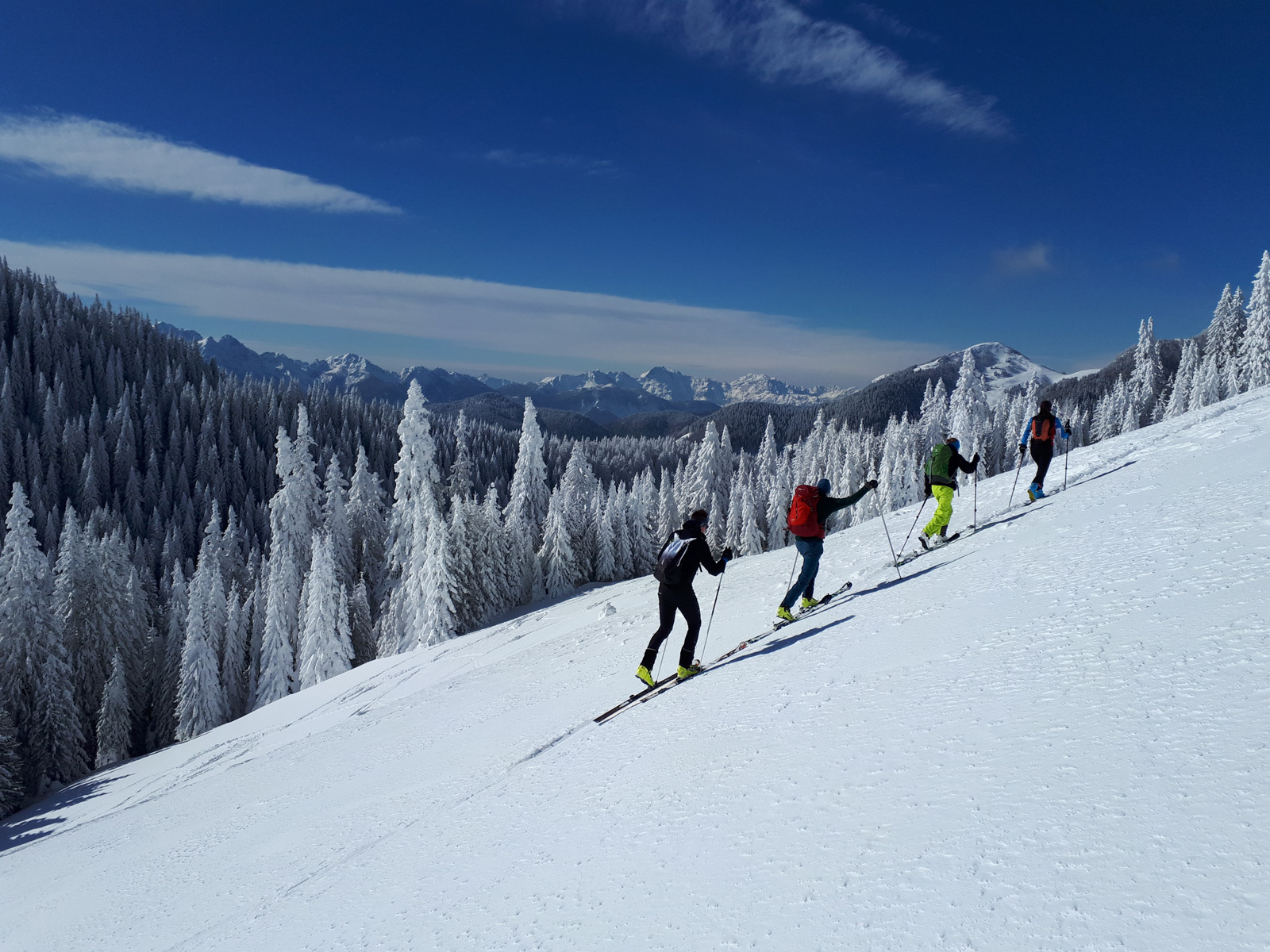 This site uses technical and third-party profiling cookies for its functionality and to improve your browsing
experience. Click accept to consent. To change your preferences or refuse all cookies, except for
functionality cookies and those strictly necessary for the use of the site, click on "Change preferences".